The grape variety Bastardo is also known as Trousseau or Trousseau Noir.  Neither of those words have anywhere near the impact or interest as ‘Bastardo’!  I love the word…and the table wine version of the grape.  I say that because, in Portugal, they use it mainly in port.  Why they choose to do that with it is a matter for them but if they tried this LiNO RaMBLe version, they would most definitely decide to make a table wine instead.

As a side bar, apparently, in Australia, it is known as Gros Cabernet.  Let’s not go there.

It’s an interesting thing right from the start.  It looks lightish in the glass but there is something impressive about it’s appearance.

Don’t even think about backing away at this point.  It’s aromatic personality is pretty, congenial and attractive.

Although it’s from young vines there’s plenty on offer.  Thanks to red and blue fruits and some dark cherry influence, it’s a little bit sweet, a little bit spicy, a little bit rustic and a little bit rock and roll!  Juicy, lovable and gluggable, a wine that reeks of genuineosity (I made that word up just in case you didn’t realise).  If only I could go back for more and more and more, but there ain’t that much of it unfortunately. 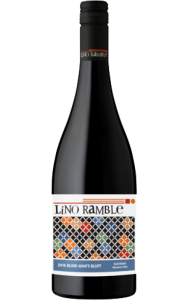