The Kennedys may have been farming for about 35 years but are relatively new to the wine scene having planted Shiraz in 2002 and releasing their first vintage in 2005.  Their range of five wines is predominately Shiraz with a Sangiovese thrown into the mix.

Many family wineries name wines after cherished members of the family or as a tribute to a grower or a long time employee.  This one is named after a valued member of the Kennedy family that has been a loyal and honest worker since 1981.  Their 1971 Leyland tray truck.  What a great tribute to something that would normally just get taken for granted!

The first thing I need to set straight is, don’t be fooled by its colour.  It has a lovely bright hue that, yes, shows it’s a young wine.  BUT!  Yep, there’s a but.  Taste it and your thoughts will change.

It’s richer than medium bodied and, I’d like to say black fruits are the main palate ‘pleaser’ but there is blueberry in there too that fills out the palate (for me anyway).  The other thing that may surprise is, and hats off to the winemaker, there is not the obvious white pepper character that can come through (sometimes dominate) in some cool climate wines.  Even the tannins are soft and bit players.  Here, the luscious fruit is the star.

I know I have written about great value Shiraz wines in the past and this one need to be added to that list.  It is indeed a bargain!! 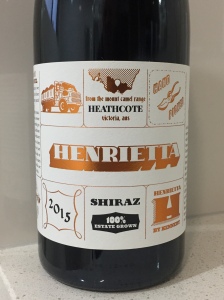