There are some pretty good, very good, and exceptional Shiraz Malbec blends in Australia. But they had to start somewhere.  Ruckus Estate are no different.

From what I have read, the young Malbec tried to be the dominate one when it came to blending it with the shiraz.  It was easily, and quickly brought back into line by reducing its percentage in the final blend.

Initially, it struggled to show anything on the nose.  I’m guessing that, after a while, again the shiraz had to show who’s boss and demand the Malbec play it’s part.  Spicy cherries showed the way.

It wasn’t as shy or bashful when it came to tasting it.  Bordering on medium bodied it showed the spicy cherries again, some white pepper (cool climate influence?) with a subtle garden fresh beetroot note and there is a bit more on the finish than you would expect even if it finishes a tad short.

A very good first up Shiraz Malbec from Ruckus Estate that is very well priced too.  Give it go. You know you want to. 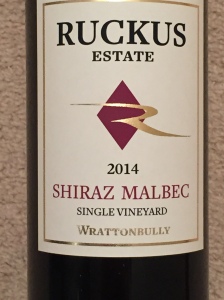