It can be so easy to get excited about a wine you rarely get to taste let alone drink with dinner.  It can also be so easy to make reference to the name, in this case Octavius, to the Roman times and just how bold, adventurous and conquering they were.  Well, I’m going to do both.

I have to admit, I have had the luxury of tasting this wine but to be able to sit down, with a superbly cooked meal (which included O’Connor rib eye) I was more than excited.  And when you realise that Gaius Octavius, commonly known as Augustus (I’m guessing because Augustus is easier to say) was the founder of the Roman Empire and its first Emperor, and when you look at his relatives (thanks Wikipedia) you realise he started something that would go down in history.  This wine may well do the same.

Just like the Roman Empire during it’s time, this wine is powerful, dominating and full of confidence.  Nothing has been spared with giving as many resources to its building and subsequent reign as an influential ruler in it’s caucus.  Thanks to the (Yalumba) family pedigree, it deserves to be so too.

This is indeed an amazing wine.  Yes, it has incredible flavours, is rich and voluptuous but is extremely balanced, approachable and elegant.  It just reeks of grandeur.  No doubt like the first Emperor of the Roman Empire experienced. 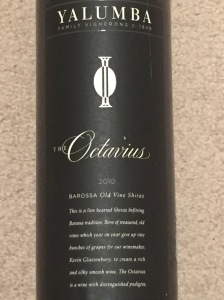