It would be easy to mention that this wine is named after Sir Robert Menzies, the longest serving Prime Minister in Australia (18 years total).  I could also mention that such a wine is dedicated to the same man who founded the Liberal Party in 1945.  Sir Robert Menzies was also the recipient of numerous medals and honours during his time (just like this wine).  I suppose it’s worth mentioning he was a fan of red wine.

Not quite sure where to start with this wine.  When I opened it and poured myself a small taste before it went into the decanter, it was quite a harsh wine.  Lots going on, disjointed but with lots of black fruits.  Well, I’m pleased to say, the decanter and the wine combined beautifully to do the job they knew they had to do.

The presentation, if you like, spoke of full on, bold as brass, and rich.  But it wasn’t.  Yes, it showed it’s youthfulness but, for me, it was such that it has lots of flavour but seemed so slinky.  I’d say it sits between medium and full bodied.

This is typical Coonawarra, no doubt.  Blackberries, blackcurrants, plums with a touch of liquorice (maybe) and clearly the tannins are happy to meld into the hint of oak on the finish that seems to go on as long as an election campaign in the United States.

As strange as it sounds, this is a subtle ‘wow’ factor wine.  A contradiction in terms maybe but, that’s how I see it.

The good thing about this wine is, it is going to survive longer than Sir Robert Menzies was Prime Minister of Australia. 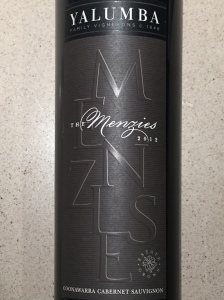